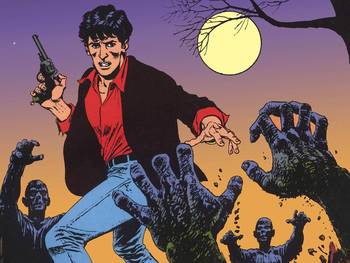 The second-best selling Italian comic book, once the first during the "Dylan craze" of the early '90s. Created by Tiziano Sclavi and published by Sergio Bonelli, Dylan Dog is a Reference Overdosed series focusing on a former Scotland Yard detective now known as the "Nightmare Investigator", who lives on 7 Craven Road, London and fights monsters, demons and many more otherworldly creatures for £100 a day plus expenses, or solves cases about horrifying sociopathic criminals. The series (at least during its early years) managed to deconstruct horror clichés and to create an intriguing, flawed and sympathetic Anti-Hero in a morally complex world. Dylan Dog was also known for the surreal, poetic quality of its writing and its black humour.

Because of a generally acknowledged rule, there was a Live-Action Adaptation called Dylan Dog Dead Of Night, starring Brandon Routh as the eponymous detective and co-starring Sam Huntington, Anita Briem, Peter Stormare, Taye Diggs and Kurt Angle (yes, that Kurt Angle). The storyline of the movie isn't an Adaptation Distillation of any story arc of the comic, but an entirely independent one instead. The film was poorly-received, and has been disowned by most fans of the comic.

Interestingly enough, it can be said that Dylan Dog has already had a movie version, but for the name and some minor adjustments. Based upon a book written by Tiziano Sclavi (the character's creator) around one of the very first drafts of the series (before Bonelli mandated the change from an Italian setting and protagonist to an Anglo-Saxon one, as customary for the Milanese publisher, whose only Italian hero to date was the Swiss-based Napoleone) and played by the very actor upon whose likenesses D.D. was molded (Rupert Everett), DellaMorte DellAmore is a pretty clear expy. Placed on the outskirts of Milan, minus Groucho, but definitely a young D.D., complete with melancholy zombies and a rusty VW Beetle.

In August 2018, Bonelli announced the foundation of a division dedicated to TV productions

and that, after buying the rights back, they will produce an English-language Dylan Dog series under their direct scrutiny, with possibilities of cameos of characters from other series published by them to set up a possible Expanded Universe.