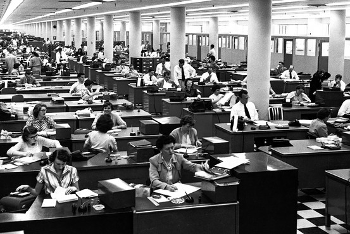 "I'm sorry, but you'll need to see Mr. W of Department X in Division Y of Agency Z."
"The bureaucracy is expanding to meet the needs of the expanding bureaucracy."
— Oscar Wilde
Advertisement:

Various bureaucracies are involved at least a little bit in nearly every facet of our lives. Most of the time it's a background entity, such as the government keeping the food safe and the roads repaired and so on. But sometimes, a person needs to interact with it a little more directly, and that's where this trope comes in. As the bureaucracy grew and took on new responsibilities, it created entities within itself to do the work. Sometimes they overlap. Sometimes they get nested within each other, like a Matryoshka doll. And sometimes the individuals within them just don't want to deal with your problem, or the paperwork to fix it, and pass you off to the next poor, overworked soul. At these times you may realize that you are dealing with a vast, formless entity, with no one you can talk to directly in charge.

Notorious for the Inherent in the System way that while no one you deal with is personally evil, nonetheless the net effect is horrific.

May have obstructive bureaucrats, but not necessary; there are just a large number of bureaucrats that are mostly just normal people doing their jobs. The Beleaguered Bureaucrat often works here. Rarely, if you are lucky, you can find the Badass Bureaucrat. May be a contributing factor to Jurisdiction Friction. Compare For Inconvenience, Press "1" and Pen-Pushing President, and pray the Celestial Bureaucracy doesn't qualify.

This trope can be considered as parent trope to Fascist, but Inefficient. Totalitarian forms of statehood and economy always require and form a vast bureaucracy, which escalates the horrid inefficiency of such societies.