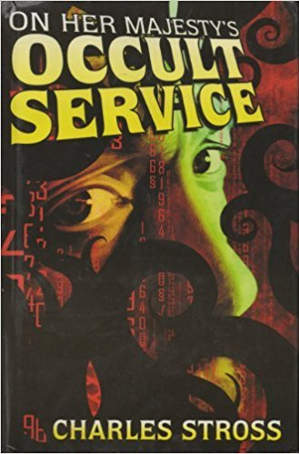 Omnibus volume containing the first two novels and two short stories
Magic is applied mathematics. The many-angled ones live at the bottom of the Mandelbrot set. Demonology is right after debugging in the dictionary.
—Bob Howard, "Pimpf"
Advertisement:

A series of Cosmic Horror Story novels and novellas by author Charles Stross. According to Word of God, the idea for the series originated from a realization that Lovecraftian horror and the Cold War are actually pretty darn similar, and if there really were elder, tentacled horrors lurking around the edges of reality, the government would get involved and the departments they'd set up to do so would look very much like Stale Beer flavored Spy Fiction.

The main protagonist of the series calls himself Bob Howard (not his real name), a Desk Jockey who was forcibly recruited into "The Laundry" (Q-Division, SOE in official papers) after his graduate computer science work nearly summoned Nyarlathotep. Now he's charged with protecting Earth from incursions by the many-angled ones, who can be summoned all too easily with modern computer technology. Most of the job is attending meetings and filling out paperwork, but every so often there's a major incident that results in Laundry agents trying to fight off Cthulhu and his cronies with their Palm Pilotsnote Hey, the first novel was published in 2001 in serial form, before smartphones were big; later novels depict Bob suitably upgrading to an iPhone, Monkey's Paw wards, and the occasional briefcase nuke, while Bob has the misfortune to land right in the middle of it.

The series is thus far composed of the following novels and short stories (in chronological order):

According to Word of God (on his blog), the series was planned in advance to be 9 books long (plus assorted side stories), with Case Nightmare Green beginning around book five or so. However, books 5-7 represent a detour from the original story arc. So there may be more than 9 books eventually if the author, his publishers, and his readers don't lose interest first.

The New Management is a spinoff series set in the same universe, after the events of The Delirium Brief. The first book, Dead Lies Dreaming, was released in 2020, with sequel Quantum of Nightmares released in 2022.

Alternative Title(s): The Laundry Series, The Apocalypse Codex, The Fuller Memorandum, The Rhesus Chart, The Annihilation Score, The Nightmare Stacks