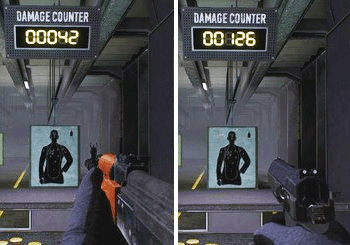 In Real Life, there are very good reasons why the militaries of the world unanimously arm their soldiers with long guns as primary weapons. These firearms have far better accuracy, effective range, and muzzle energy than any pistol - while various factors make universal rules tricky to apply to terminal ballistics, a standard intermediate-power rifle round (such as the 5.56mm NATO) is generally considered superior to any non-novelty pistol round. A full-power rifle round (such as the 7.62mm NATO) is considered superior to even the gigantic .454 Casull, .50 Action Express, or even .500 Smith and Wesson pistol rounds, novelty ammunition largely disliked by even strong, veteran shooters for their titanic recoil and ludicrous price per bullet. As a rule of thumb, the best soft body armor vests

can stop just about any pistol round short of the aforementioned novelty ammunition, even the mighty .44 Magnum, yet will be zipped through like butter by any intermediate-power rifle round, even when multiple vests are stacked on top of each other.

To stop these bullets requires hard body armor. Wounding profile is slightly less lopsided in favor of rifle rounds due to some pistol rounds having fairly high momentum and mass, but even then, assault rifle bullets tend to inflict far worse wounds.

But in video games? Not so. It's incredibly common for both First- and Third-Person Shooters to offer the player a 'heavy pistol' or revolver which is vastly more powerful per shot than their standard automatic rifle, usually capable of taking out mooks with a single headshot while the rifle might only plink away at them even with those same headshots. Even more standard handguns often have a damage per bullet that's at least comparable to an assault rifle, if not superior.

Why does this happen? While having one weapon be overwhelmingly superior might be realistic, it doesn't make for particularly fun gameplay. If video game pistols reflected the same role they do in Real Life, players would come to the same conclusion real militaries do: that there's little reason to ever use them when an automatic rifle is available. Developers want to give players a variety of more-or-less balanced weapons and tactics to choose from, and dramatically boosting the power of pistols allows them to stay fun and useful weapons, despite their lower capacity and (in games where you can aim weapons) harder-to-use ironsights, without making any glaring inaccuracies to the average player.

Contrast Ranged Emergency Weapon, when the pistol is the weakest gun in the game instead, as well as Sorting Algorithm of Weapon Effectiveness, where the starting weapon(s) get outclassed quickly. See Shotguns Are Just Better for a similarly "basic" weapon being among the most effective of a game. May also affect whether a pistol is a Sniper Pistol or not. Not to be confused with a punch-triggered pistol.