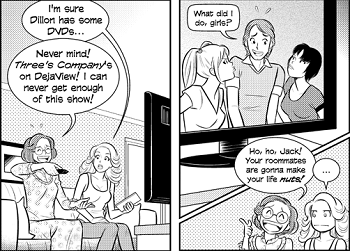 Sometimes a story isn't a remake, but borrows themes and/or situations from an earlier story. This isn't a Whole Plot Reference or the Serial Numbers Filed Off, but rather the normal realm of artistic inspiration and literary allusions.

When one work is inspired by another, oftentimes its creators will slip in an affectionate Shout-Out to the original as an Easter Egg. Nothing too overt—just a slight nod acknowledging the older work's influence on the newer one.

This Inspiration Nod will let people know that "Yes, we have seen the previous work" and "Yes, we do note the similarities between our works". It often appears in a very particular part of the production choices, something that would be outside of the natural course of inspiration but which unambiguously points to another work.

Say, you have the trench run in Star Wars and its connection to the The Dam Busters. So George Lucas fills in a small detail, like the background chatter, with something from Dam Busters. It doesn't affect the actual trench run (compared to the targeting computer) but gives a little nod to the original inspiration.