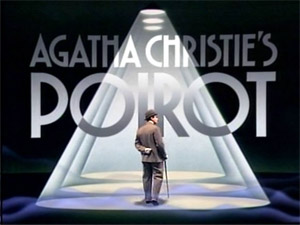 "It is the little grey cells, mon ami, on which one must rely."
— Hercule Poirot
Advertisement:

The adaptations have a long Start to Corpse time, sometimes up to half an hour. This is consistent with the original works: Agatha Christie herself rarely began her books or stories with the discovery of a body, and we frequently meet the victims while they are still alive.

The complete series was out on DVD and Blu-Ray in Europe on 18 November 2013, five days after its finale, and it's been released in the United States as well: Seasons 1-6 (in the Early Cases Collection) were released on 23 October 2012, followed by the rest of the series (Seasons 7-13) in the Final Cases Collection, released along with the Complete Cases Collection on 4 November 2014.

The only Poirot story they didn't adapt was the play Black Coffee (later novelised by another writer, not Christie). In 2012 Suchet performed a rehearsed reading of it in aid of Chichester Festival Theatre's restoration fund, checking the very last Poirot story off his list. note Also left unadapted were "The Submarine Plans", "The Market Basing Mystery", "Christmas Adventure," "The Mystery of the Baghdad Chest," "The Second Gong," "The Incident of the Dog's Ball," and "Hercule Poirot and the Greenshore Folly", all of which were later expanded into other works that were adapted.

M. Hercule Poirot explains the murder. Spoilers for "The Tragedy at Marsdon Moor".

M. Hercule Poirot explains the murder. Spoilers for "The Tragedy at Marsdon Moor".