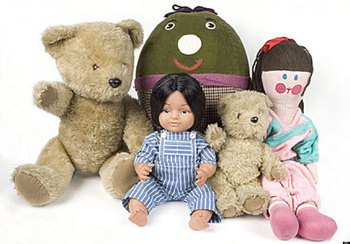 The toy cast from the BBC version of this show. Clockwise from left - Big Ted, Humpty, Jemima, Little Ted and Hamble. 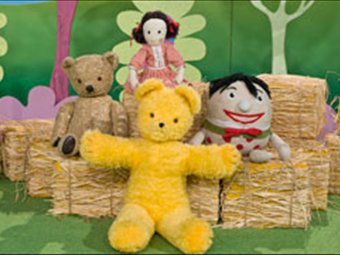 The toy cast from the Australian version of the show.
Advertisement:

The success story that is Play School started in Britain in 1964. It was a preschooler show at its most basic—save for one film clip an episode, there were few gimmicks and the entirety of the show was carried on the shoulders of the two presenters—never the same each day, and always one man and one woman. All they had to play with? Everyday junk (used for homemade crafts), the toys (really the only constant "cast" on the show), a short story (always after checking the time on a clock), and a film shown through "the windows". There would also be songs, and activities that children at home could participate in.

Astonishingly, the show actually caused a strike at the BBC. A regular feature of the show was a clock with a turntable underneath, on which a different set of objects would rotate past the camera each day. A union dispute over whether this constituted a prop or a special effect (and therefore which union was responsible for operating it) blacked out Television Centre for weeks!

In 1966, the format was adapted for Australian TV by The ABC. Both shows ran concurrently until 1984, when the British version was axed. The Australian version, however, has gone on to become so ingrained in the culture that you'd be hard-pressed to find any Australian person who hasn't watched the show at some point. Many of the show's presenters are well-known Australian actors, and the job is quite a challenging one. The show has changed very little over the years, aside from one revamp in 1999 that changed the "Windows" into a rotating prop. Notably, this is one of the few children shows ABC broadcasts on several Pay TV providers worldwide via the Australia Plus TV (Previously Australia Network and ABC International) channel.

There was also a Norwegian version called Lekestue that ran from 1973 until the early 1980s, and a Canadian equivalent, Polka Dot Door, which ran from 1971 to 1993 and spawned two spin-offs, Polka Dot Shorts and Giselle's Big Backyard.