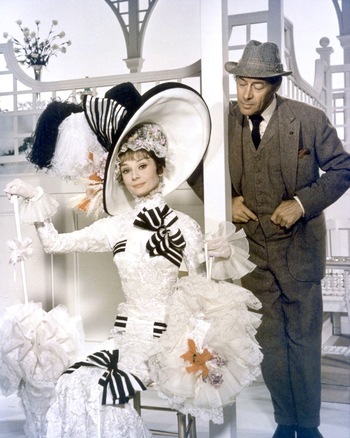 The Earth rotates on the axis of this lady's hat.
"I've always said, 'Give me horses, capes and cleavage and I'm a happy man.'"
— Patrick Swayze, North & South featurette
Advertisement:

A costume drama is a Period Piece in which elaborate costumes, sets and properties are featured in order to capture the ambiance of a particular era. Most costume dramas are adaptations of classic literature, often romances, but the term can also be used to describe things such as Robin Hood.

Even if the plot is unrealistic or falls victim to Sadly Mythtaken, if the costumes are lavishly detailed and the designer has Shown Their Work a film can still be a good example of costume drama.

See also Swashbuckler, Sword and Sandal, Wuxia and Jidaigeki, many of which can be considered costume dramas.