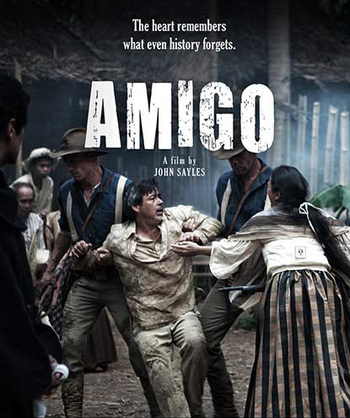 The first Vietnam. Except America won.
"At the turn of the last century, the United States declared war on Spain. They pledged to free the island of Cuba, ninety miles to the south, from colonial rule. It was thus that American troops came to yet another Spanish colony—half a world away. They decided to stay."
Advertisement:

Amigo, released in 2010, is an indie, joint American/Filipino production, directed by notable small-time indie filmmaker John Sayles, and starring the likes of Garret Dillahunt, Chris Cooper and Dane DeHaan on the American side, as well as a rather star-studded cast on the Filipino side, including such luminaries as Joel Torre, Rio Locsin, Ronnie Lazaro & Pen Medina, amongst others. (The Spanish side meanwhile is represented by a friar played—rather ironically, possibly deliberately so—by Cuban-American Yul Vazquez.)

The Philippines, 1900. Joel Torre stars as Rafael Dacanay, the head (cabeza) of the tiny Filipino barrio of San Isidro, which is just beginning to enjoy its newfound independence from Spain (as evidenced by chained soldiers and the locked-up friar, Padre Hidalgo), when out of nowhere the Americans burst in, bringing the Philippine-American War into this small corner of Luzon. This puts him between a rock and a hard place, as the Americans obviously expect him to cooperate, but his own brother is in the Revolutionary Army under General Emilio Aguinaldo, now forced to fight off a wholly new coloniser in this new, brutal and largely forgotten chapter in the history of American imperial power. The rest of his family is similarly divided by their loyalties. Both sides are armed, dangerous, and will not hesitate to shoot anyone presumed to be working for the enemy. Whose side is he to choose?

Notable for being one of the very few fictional works made by Americans about their colonial empire, in stark contrast to the abundance of British colonial fiction and literature about The British Empire, producing such luminaries as Rudyard Kipling, George Orwell, E. M. Forster, and so on. The Real Glory, made back in 1939—before World War II, while the Philippines was technically still a U.S. colony, though upgraded to Commonwealth status—is one of the few other known American films about the Philippine-American War period, and even then it deals with the Moro (Muslim) Rebellion in the southern Philippine region of Mindanao.note Most of Mindanao had never been conquered by the Spanish, so when the Americans came, the locals' resistance was basically independent from the originally anti-Spanish revolution in the northern and central Philippine regions. Contrast an even more obscure play by George Ade, The Sultan of Sulu, which deals with the U.S. invasion of Sulu, off the coast of Mindanao, and also a precursor to the Moro Rebellion—but which, as a musical, is treated more comically. note Partly this may be because the play was finished in 1902—the worst atrocities of the war, either in the Catholic Philippine regions or in Muslim-majority Mindanao, had yet to happen, let alone reach the attention of would-be ardent anti-imperialists, like Mark Twain, who later did write scathing indictments of American atrocities in Mindanao, most notably the Battle of Bud Dajo (a.k.a. the Moro Crater Massacre) of 1906.

Also compare Heneral Luna, a 2015 Biopic also set during this war, and whose protagonist, the eponymous General Antonio Luna, was the Real Life chief-of-staff of General/President Emilio Aguinaldo's Revolutionary Army. For another fictional though more minimalist and surreal take on the war from another part of the Philippine archipelago, compare Balangiga: Howling Wilderness, a 2017 indie film set in Samar province, in the Visayas region in the central Philippines.