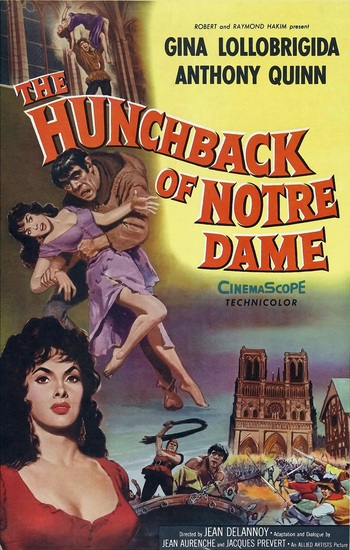 The Hunchback of Notre Dame is a French-Italian 1956 film adaptation of the eponymous novel by Victor Hugo. Produced by Paris Film Productions and Panitalia and directed by Jean Delannoy, it starred Anthony Quinn as Quasimodo, Gina Lollobrigida as Esmeralda and Alain Cuny as Claude Frollo.

The third major film adaptation of the story following the American versions of 1923 and 1939 and the first in colors, it is most noted for being Truer to the Text, even keeping Hugo's original Downer Ending intact.

French and English versions of the movie were shot simultaneously. There are a few differences between the two versions, some of these aimed at keeping the English version compliant with The Hays Code.