Literature / The Mystery of Edwin Drood 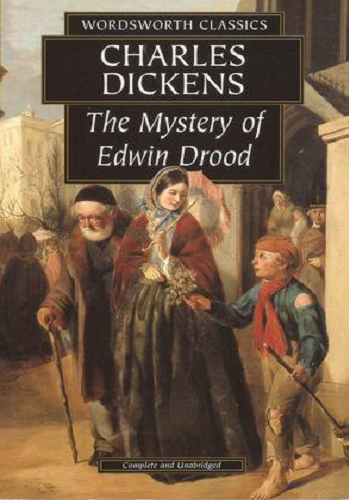 The Mystery of Edwin Drood is Charles Dickens's last novel. As was usual for Dickens, the novel was written and published in serial installments; Dickens died after completing only six of the projected twelve installments, leaving the novel incomplete and the mystery unresolved.
Advertisement:

The plot revolves around the disappearance (perhaps murder) of Edwin Drood, whose fiancée Rosa Bud is an object of attraction for several other characters, including his uncle, John Jasper, and the proud Neville Landless.

The solution of the mystery is actually known: Drood's uncle, John Jasper, is the murderer. Dickens had told several people whodunnit, and his friend John Forster later published a synopsis of the novel's planned conclusion bringing together various details Dickens had mentioned to him, including Edwin's fate, whodunnit, and the intended fates of other significant characters. This hasn't stopped multiple people writing their own endings, not all of them agreeing with Forster's account.

Notable continuations and adaptations include: