I Kiss Your Hand 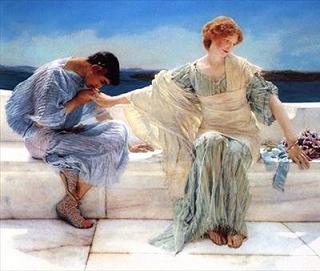 Ask Me No More by Sir Lawrence Alma-Tadema
Advertisement:

A male character takes the hand of a woman (often his Love Interest) and kisses it as a mark of respect. Used to portray the man as particularly romantic, chivalrous, foreign, or just a bit old-fashioned.

In modern times this can come across as rather creepy, especially if the guy doesn't know the woman very well. For this reason, it is sometimes done by sleazy villains in order to show up the less 'cultured' hero. In such cases, a lady will occasionally be seen to withdraw her hand before it can be kissed or even making it awkward for the man to try by offering her hand palm sideways, thumb up, fingers straight as if to insist on only a handshake.

The etiquette and protocol for the hand kiss is a laundry list longer than the rules for the game of Fizzbin. For example, one may only kiss the hand of a woman who specifically offers her hand for this purpose. One may only kiss the hand of a married woman and never outdoors (though both rules are frequently broken in fiction). There are also different ways to kiss a lady's hand based on whether or not you're meeting her for the first time. A gloved hand may not be kissed (unless it is an opera-style arm-length glove). Also, the lips are not supposed to actually even touch her hand at all. Some mention that the gentleman is allegedly supposed to kiss his own thumb where it is gripping her hand. As confusing and inconsistent there rules are, it's no surprise that they are seldom, if ever followed in fiction (or even real life for that matter), unless absolute historical accuracy (or just the appearance of it) is a priority. Historians debate as to whether these rules were ever consistently followed. It's unlikely since Europe is a fairly big and diverse place. And unless one is a member of the Society for Creative Anachronism (which itself is known for allegedly being historically accurate except where it's inconvienent), you may not have realized that there were any rules at all.

Does not usually qualify as a First Kiss (or a Last Kiss for that matter), but may if the character is depicted so reserved this is the deepest expression of emotion he will allow. May therefore be a case of Anywhere but Their Lips.

When a character kisses his own hand, it's a Kissing Warm-Up. When the hand is only the beginning, it's Kiss Up the Arm. Contrast with I Kiss Your Foot.