I Kiss Your Foot 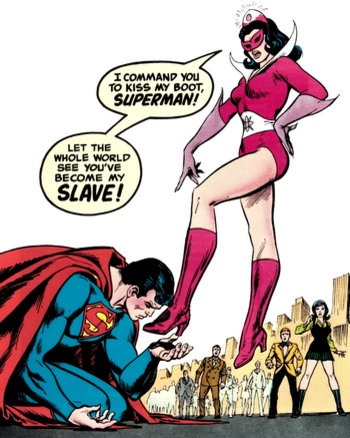 "Got so many names
I'm Queen of the Andals,
Queen of the Meereen
Yeah! You can kiss m' sandals."
— Emilia Clarke, "Rastafarian Targaryen"
Advertisement:

A character kissing someone's hand is used sometimes for romance, and other times to show humility. Sometimes, though, it's not the hand they kiss, but they aim much lower ...no, they don't stop there! Get Your Mind Out of the Gutter! They kiss the foot.

Kissing someone's feet (or shoes) can mean many different things. It often means an even greater humility than hand-kissing, or even more often can be used to show submission ("Now you have to kiss my feet!") or devotion. Less often, it is used romantically. In period settings, kissing the hem of a woman's gown is a common substitution. Quite a few egotistical and evil characters demand from their underlings this gesture as a sign of acceptance of their dominance, without always seeing The Starscream who swallows his pride and plays along for some time.

Even when it's not meant to be... romantic, some people see it that way. Not to be confused with It Tastes Like Feet, although Ross Geller might claim that there's some overlap.

Compare Literal Ass-Kissing, which is an even more humiliating gesture of submission that is more likely to be Played for Laughs.

This lasts about a month-and-a-half before Maureen gets bored of playing that role and goes back to playing herself in full-on diva mode.