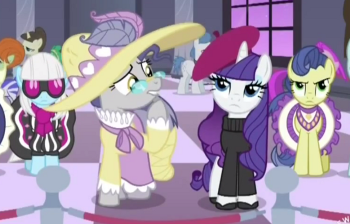 Rarity is in Canterlot for a few days to buy some new fabrics for her store, staying at a suite in the royal castle thanks to a few favors invoked by Twilight Sparkle. To thank Twilight, Rarity plans to make a new dress for her and present it at her birthday party that weekend.

While she's stopped at a cafe with her pet cat Opal, two ponies named Jet Set and Upper Crust start asking her about her hat when a country-bumpkin window-wiper recognizes Rarity, loudly revealing her commoner roots. After the two sophisticates dismiss Rarity for being "country," she vows to show a creation worthy of Canterlot and quickly designs an elegant dress for Twilight that matches the styles of the Canterlot elite.

Out for more material, Rarity's vision is blocked by her bags, causing her to bump into Fancypants, the pony on top of the Canterlot social hierarchy. As Rarity apologizes for the accident, Fancypants recognizes her as a special pony (thanks to her stay at the castle) and invites her to his private box at the Wonderbolts Derby later that day. Although it'll give her less time to work on Twilight's dress, Rarity accepts. After she correctly predicts the derby winner and name-drops Rainbow Dash as the Wonderbolts' trainer, Fancypants declares her his "new favorite party guest". Rarity is quickly flooded with more invitations from the Canterlot upper crust, which takes up all her time and leaves her too tired to do anything more than to construct the basic dress form for Twilight.

On the day before Twilight's party, Rarity is packed up and ready to head home when she gets an invitation to the Canterlot Garden Party, the second-most important event in all of Equestria. Despite her guilt, she accepts the invitation, then sends a letter to Twilight claiming that she'll miss the birthday party because Opal has fallen ill and can't make the trip home.

The next day, Rarity prepares to head out for the Garden Party, only to be surprised by Twilight and all their friends! Apparently, Twilight was upset that Rarity couldn't attend her birthday party, so she asked Pinkie Pie to move it in Canterlot instead. While Rarity starts to panic, Twilight spots the uncompleted dress, then profusely thanks Rarity and compliments her for capturing her own plain and practical nature.

The Mane Six proceed to the royal castle, as Princess Celestia has graciously loaned the main ballroom for Twilight's party. Fortunately for Rarity, the Garden Party is just outside, so she starts rapidly switching between the two events. After Rarity accidentally brings in a croquet mallet from outside, Twilight discovers that she's been sneaking out, then compliments Rarity for using the opportunity to sell her designs to the Canterlot elite. Not only do Rarity's friends let her go to the Garden Party...

...but they invite themselves to come along.

Rainbow Dash: C'mon, you guys! Let's show them how to party, Ponyville-style!

Hilarity Ensues as the plain ponies of Ponyville and the Canterlot crème de la crème mix in a most inharmonious manner, with the latter appalled at the former. Twilight's dress catches Fancypants' eye, and he politely asks her for the designer. When Twilight reveals that Rarity made it for her, Upper Crust and Jet Set begin smirking and laughing, only to be set silent when Rarity gathers her courage and stands up for her friends as the most important ponies she knows. To her surprise, Fancypants throws his support behind her, complimenting the other ponies as "charmingly rustic". The various Yes-Ponies quickly change their view of Rarity again, rapidly throwing her compliments and orders for gowns.

Back in her suite, Rarity prepares a letter for Princess Celestia, only to deliver it verbally when Celestia herself stops by:

No matter where you go in life, you should never forget that you are the product of your home and friends. And that is something we should always be proud of, no matter what!