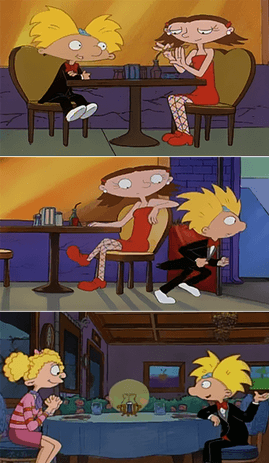 "You gotta set up tables at both restaurants. And if Ruth shows up, you can make an excuse and go back across the street."
"Oh, man, I've got two dates to the Spring Dance. It's sort of like that old episode of... well, every show."
— Malcolm, Malcolm in the Middle, "Malcolm Dates a Family"
Advertisement:

A character schedules dates with two different people at the same time. Rather than cancelling one of the dates, the character tries to attend both simultaneously, constantly running back and forth between the two locations while making up various reasons to excuse themselves to avoid letting either party know where they are going.

Can also apply to other scheduling conflicts, where the character tries to juggle an event that he's required to attend, versus a more personal event that he really wants to attend.

If one of these scenes has a dress code of some form, expect a character to be caught wearing the outfit for one event at the other.

Examples of other scheduling conflicts:

Sometimes, the character ends up spurning the big personal event altogether, to deal with the other commitment: