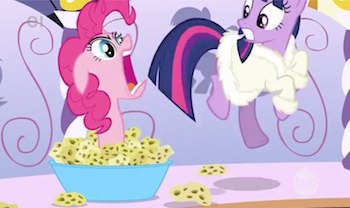 Rarity and Fluttershy meet up for their weekly spa day, where Rarity announces that she's doing a fashion shoot with the famous fashion photographer Photo Finish and proceeds to cajole Fluttershy into modelling her outfits. As they help prepare for what Rarity is convinced is her big moment, Spike decides to let Twilight Sparkle and Pinkie Pie in on a secret: he has a crush on Rarity. Twilight is unimpressed, especially when Spike makes them promise to keep his secret, but Pinkie adamantly insists that they agree:

Photo Finish arrives for the big shoot and is apparently impressed enough to ask to do another one, but it turns out she's interested in working with Fluttershy, not Rarity. Fluttershy finds herself reluctantly catapulted into the life of a fashion model, while Rarity fights back her envy as best as she can.

As luck would have it, Fluttershy and Rarity both confide their true feelings to Twilight Sparkle: Rarity is insanely envious of Fluttershy's success but is trying to be supportive and let her friend have "her moment to shine," while the meek and shy Fluttershy hates being the center of attention but doesn't want to let Rarity down after all her support and encouragement. Twilight drives herself up the wall trying to decide between letting her friends suffer and breaking her promise to keep their secrets; she is not helped by Pinkie Pie randomly showing up and reminding her that keeping secrets is Serious Business.

Twilight eventually tries sabotaging Fluttershy's latest fashion show with her magic, but Rarity turns the crowd in Fluttershy's favor with her enthusiastic cheering. When Rarity visits Fluttershy afterwards to congratulate her, Twilight drives herself mad trying to keep from blurting out her friends' secrets. Fortunately for her, this becomes a moot point when Fluttershy and Rarity finally confess how they really feel about their situation, make amends for not telling each other sooner, and leave.

Unfortunately, the neurotic Twilight finally loses control and blabs about Spike's crush... to Photo Finish. Spike is quick to forgive her this slight lapse and is prepared to write Twilight's letter to Celestia about what she's learned from this experience (that while some things are okay to keep secret, around friends it's usually better to be honest with your feelings)... once he's done fawning over Rarity, that is.