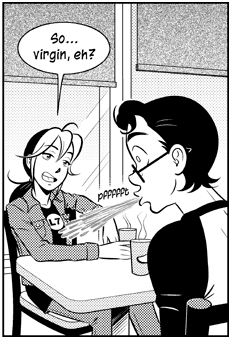 Barging into a subject like that while he's drinking? Really, Zii should know better.
[spits out water] "Why is it that I'm always drinking when a scene like that happens?!"
— The Critic (reviewing Milk Money), The Nostalgia Critic
Advertisement:

A Reaction Shot to an unexpected event that involves spraying food or, more commonly, drink from a character's mouth. In some cases, the character sprays their drink out of their nose instead of their mouth. It can be Truth in Television, as many people can attest, though in real life laughter is more likely than shock to induce such a reaction. The non-eating version is generally a "pfft".

Why surprising news or the punchline of a joke is so often delivered when a character has a full mouth can only be ascribed to Rule of Funny. May also be part of an I Ate WHAT?! reaction to the efforts of a Lethal Chef or Cordon Bleugh Chef.

A common Lampshade Hanging for this trope is when a character pauses to take a drink just so he has something to spit out in reaction.

See also: Double Take, The Take, Dramatic Drop, and Discreet Drink Disposal. Not to be confused with Spit Shake. Compare Spraying Drink from Nose, which is usually caused by laughter instead of surprise. Unrelated to Spit Shine.

She had triplets.
Spits back into the mug she was drinking out of.
Literature
Live-Action TV

And Natalie does a spit-take all over Harold, because the analyst's name actually is Doctor Bell!

No More For Me, Thanks!

When Frobo lifts Stumpy's high into the air, Wally thinks he's had too much to drink when he sees a fish-bird pass by the window, pushing his mug away.

Example of:
No More for Me

No More For Me, Thanks!

When Frobo lifts Stumpy's high into the air, Wally thinks he's had too much to drink when he sees a fish-bird pass by the window, pushing his mug away.