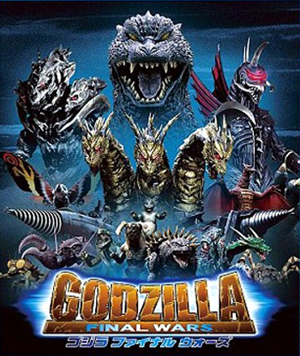 This "Godzilla" guy is one tough dude!
"Listen kid: There are two things you don't know about the earth. One, is me. And the other is... Godzilla."
— Captain Douglas Gordon
Advertisement:

Godzilla: Final Wars is the 28th Godzilla film and the sixth and final entry in the Millennium era. It is directed by Ryuhei Kitamura and written by Isao Kiriyama and Wataru Mimura.

In a world where warfare and pollution have created human mutants and giant monsters of destruction, the Earth Defense Force (EDF) deploys its greatest weapons to bury Godzilla in ice. Many years later, the EDF discovers the body of Gigan, whose genetic composition matches the genes found in mutants. Then monsters begin attacking all over the world and the EDF is on the offensive when UFOs apparently destroy them. The Xilians claim to be of peaceful intention and warn of the coming of the destructive asteroid Gorath. But the EDF discovers the Xilians' true intention of taking over the Earth and, after one of the Xilians (Kazuki Kitamura) commits a coup d’état, all the monsters are unleashed and most of the mutants are controlled.

In an act of desperation, the remaining EDF members and their allies decide to free Godzilla (Tsutomu Kitagawa). With their flying submarine battleship Gotengo, they guide him across the world, where he makes short work of the monsters; first trouncing Zilla in Sydney, then facing Kumonga in New Guinea. He faces Kamacuras in Manazuru, Anguirus (Toshihiro Ogura), Rodan (Naoko Kamio) and King Ceasar (Motokuni Nakagawa) at Mount Fuji, Ebirah (Ogura) and Hedorah (Kazuhiro Yoshida) on the outskirts of Tokyo and finally arrives in Tokyo proper. As the mutants take their battle to the Xilians, though, Godzilla faces Monster X (Nakagawa) in Tokyo, who proves himself to be very powerful indeed, even mutating into a quadrapedal, golden beast known as Monster X-II, or Kaiser Ghidorah...

The film was released on December 4, 2004. Due to the previous films not making enough yen, Toho decided to temporarily retire Godzilla with a bang for Final Wars. They brought back many Kaiju that haven't been seen in many decades, a music soundtrack different to previous movies, and a more action-oriented story. Final Wars had a less than stellar box office performance and reviews were mixed. Some criticized it for not developing the story and characters enough while others lauded it for being a fun celebration of the King of the Monsters.

A short film released in 2021 to celebrate the 50th Anniversary of Godzilla vs. Hedorah reused suits from the film, essentially making up for the latter character's very brief screentime in Final Wars.

Godzilla takes on the 1998 American Godzilla...and easily defeats him.

Godzilla takes on the 1998 American Godzilla...and easily defeats him.