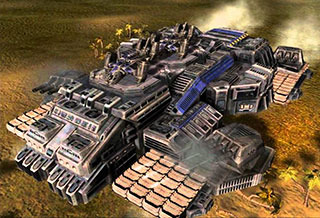 Nothing fancy, just a Submersible Land Battleship Aircraft Carrier Factory Shield Generator.
"Wot's faster than a warbuggy, more killy than a warbike, and flies through da air like a bird? I got no bleedin' idea, but I'm gonna find out."
— Kog da Flymek, pioneer of the Deffkopta, Warhammer 40,000
Advertisement:

In the military, innovation has driven military conquest as someone found new ways to do something that was better than what came before. However, in Speculative Fiction, it seems that a lot of people have decided combining previous concepts into one über-machine is easier than coming up with something original.

Enter the Military Mashup Machine. In reality, some of these would be far more expensive than practical, with other existing military technologies being much easier to get the same results from, but if it looks cool, why not present it as worthwhile?

Its also worth noting that numerous militaries since the dawn of man have attempted to build them for the same reason. Most such projects meet their end on the drawing board thanks to the intervention of saner minds, but the occasional lovechild of General Ripper and The Engineer somehow manages to sneak into production. Usually these result in machines with predictably lackluster performance, but a handful have proven surprisingly effective.

While generally members of Speculative Fiction or Science Fiction, these can also show up in Steampunk as well. See Airborne Aircraft Carrier, The Battlestar, and Mobile Factory for specific Sub Tropes. See More Dakka for a similar philosophy applied to ranged weaponry.

open/close all folders
Land Battleship
The Land Battleship is a landgoing vehicle bristling with heavy artillery, generally the equivalent of a naval vessel's guns only on land, or rather, a really big tank. Often used in deserts and grasslands so the creator can ignore the pesky issues of being unable to move something this size in any kind of obstructed terrain.

Advertisement:
Amphibious Tanks
Aren't just tanks that can travel on water, but often are entirely submersible until they surface on the beach.

Amphibious Jet Fighter
These can fight equally well in the air or in the water.