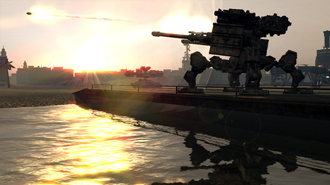 Chromehounds is a squad-based Massively multiplayer Mecha Game for the Xbox 360, developed by FromSoftware. The game is set in an Alternate History version of 2006, on the south shore of the Black Sea- as 3 countries battle it out for control of a region known as Neromius. Of course, how the war turns out is up to the players, and thus, the story of the war is reset every so often, so that new players can join in.

The game's single player, is more of a tutorial on the role-types, which do come into play in the multiplayer, is about how the "Neromius War" got started. That said, the single-player part of the game is severely lacking in comparison to the excellent multiplayer mode.

Regarding the minimal story the game has: The cold war combined with solar flares caused America to become extremely isolationist, and several wars broke out as a result, leading to the independence of 3 nations within Neromius: Tarakia, which does have America's backing, Morskoj, a nation that broke away from the USSR, and a stereotypical middle-eastern nation- Sal Kar (backed by South-east Asia). (Oh, there's some other groups, too: Rafzakael, a sort of "Mercenaries R Us" business the player works for, and a mysterious organization on level of the Knights Templar, called Cerberus. But they don't matter that much, outside of the fact that they're responsible for starting the Neromius war.) Also- these wars lead to the development of a new type of tank: the Advanced Combat Vehicle or ACV, which could interchange weaponry parts based on a standard hexagonal frame. This in turn lead to the development of the titular weapon, the Hound, an advanced ACV that could interchange all of its parts. With this, mercenaries took to the field in the Hounds, and soon began a series of events that lead to war...

Oh, this game may be a prequel to Armored Core.

The game's servers were shut down January 6th 2010, with a sequel being unlikely. Luckily, a Fan Sequel of sorts is in active development for the PC - Modular Assault Vehicle