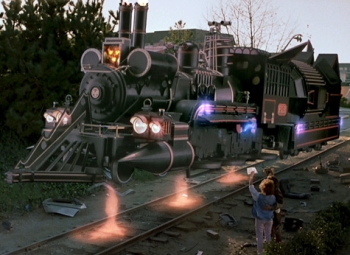 Next stop on the Brown Line, the past!
"When I hear the iron horse make the hills echo with his snort like thunder, shaking the earth with his feet, and breathing fire and smoke from his nostrils, it seems as if the earth had got a race now worthy to inhabit it."
— Henry David Thoreau, Walden
Advertisement:

Well, lots of these are actually only Cool Locomotives — including the page image — but hey, let's not split hairs.

Primarily a feature of Steampunk settings, the Cool Train may only be able to run on rails — and generally is not under the control of the traveling character — but that doesn't stop it from being loaded with gadgets or just being generally awesome. Just ask a Rail Enthusiast.

Afterlife Expresses can also be Cool Trains, even if they aren't the hippest trip in America.

Not to be confused with The Cole Train, or Radical Train.

Balan takes the player on one that flies around the hub world when unlocking new areas.

Balan takes the player on one that flies around the hub world when unlocking new areas.