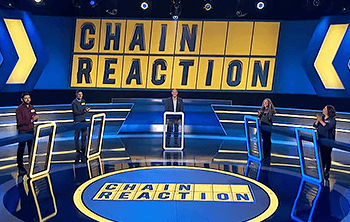 Are you ready to put your brains to the chains?
Advertisement:

Game Show franchise created in 1980 by Bob Stewart (of Password and Pyramid fame) for NBC and hosted by Bill Cullen. In this game, two teams — in true Stewartian fashion, each composed of two celebrities and a civilian — competed to form a chain of eight words. Each chain consisted of words that had some relation to the next word in the chain. For example, a completed chain would be TWIST ANKLE BRACELET CHAIN GANG WAR STRATEGY CHESS - an ankle is something that often gets twisted, an "ankle bracelet" is a piece of jewelry, bracelets have a chain, etc. Given the first and last word of each chain, the teams would attempt to guess the missing words, which were revealed one letter at a time. The winners then proceeded to a Bonus Round dubbed Instant Reaction, which was more of a cousin to the Pyramid format of using a long clue to describe a word, except the celebrities from the winning team constructed the clues one word at a time. This Bonus Round was later adapted into its own game, a short-lived format called Go.

The series was revived as The New Chain Reaction on USA Network and Global in Canada (where this incarnation taped, in Montreal to be specific) from 1986-91 with teams of two contestants each. At first, this version was hosted by Blake Emmons, a Canadian television personality and Country Music singer. Blake Emmons was a contestant on The Joker's Wild during Bill Cullen's tenure, and lasted only a few months as host of Chain Reaction before being replaced by Geoff Edwards (who had previously hosted a number of Stewart series and pilots; his most recent hosting gig up to that point was Starcade, plus the unsold 1985 Stewart pilot $50,000 A Minute). Because of CanCon laws, Chain Reaction had to feature a Canadian personality on camera, and as a result announcer Rod Charlebois appeared on-camera in every show for the rest of the run. This version simply offered another chain as its bonus round. 1988 saw the two-member teams dropped for solo players, and the final season became a tournament for a top prize of $40,000, resulting in a rename to The $40,000 Chain Reaction.

In 2006, GSN (formerly the Game Show Network) revived the format with Dylan Lane as host. The rules stayed mostly the same, except the teams were always three men vs. three women. The format also included a small four-word "speed chain" after each solved chain, as well as a betting format in Round 4. In Round 4, contestants bet certain amounts on whether or not they would get the chain word right; unfortunately, this often led to contestants whittling away their lead on stupid guesses. This version also saw the return of Instant Reaction, but with slight rule changes. Additionally, all chains were now composed of two-word phrases or compound words instead of words with an abstract relation to each other. For instance, a completed chain might have CHAIN REACTION TIME TABLE TENNIS BALL GAME SHOW, forming the phrases of "chain reaction", "reaction time", "time table", "table tennis", etc.

GSN revived the format again in 2015 with another new host, Mike Catherwood (best known as the host of Loveline); this version seemed to hearken back more to the USA era, with a similar logo and format (the Speed Chains were dropped, and the contestant teams were reverted back to two players; the betting element in Round 4 was still present, however); because of the lack of a third contestant, Instant Reaction was dropped again, this time for a new endgame called the Superchain (see below). In 2021, the show was revived a second time, again with Lane as the host, and Mike Richards as showrunner. Three-person teams were restored, but Instant Reaction was not; instead, the bonus round had the winning team try to solve three short chains within 60 seconds.

There had been other versions of the format for countries outside the United States, including a French-Canadian one in Quebec called Action Reaction (taped on the same set as the Emmons/Edwards run), an Italian one called Reazione a catena, and a British version called Lucky Ladders on ITV.

Not to be confused with the film starring Keanu Reeves.