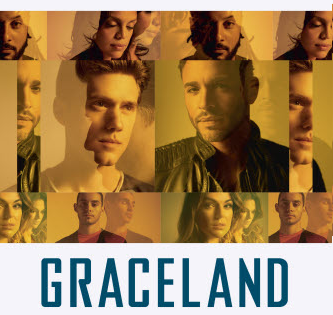 When you're undercover, lies are your life.
Advertisement:

Graceland is an hour-long drama series on the USA Network that premiered in June 2013.

Created by Jeff Eastin, it focuses on a group of undercover agents from various United States law enforcement agencies, including Customs, the DEA, and the FBI, who live together in a Southern California beach house dubbed 'Graceland'. Rookie FBI agent Mike Warren, despite graduating first in his class and requesting a post in Washington, is assigned to Graceland to be trained in undercover operations by the enigmatic Paul Briggs.

The show ran for three seasons and concluded in September 2015.