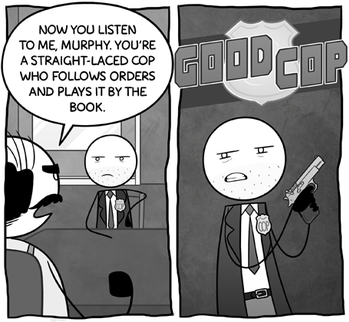 Benefits include: Throwing the book at criminals, literally.
"I was guilty as sin, but Valentine couldn't prove it. And he was the rarest breed of law enforcement officer: the type who knew I was breaking the law, but wouldn't break it himself to bust me."
— Yuri Orlov, Lord of War
Advertisement:

The By-the-Book Cop is a stock character in police shows and crime fiction in general. They're the cop who believes in following the law as it is written, playing by the rules even when the criminal scum they're after does not. A stickler for procedure, the By-the-Book-Cop is quick to chide their rookie partner for playing fast and loose out in the streets, and when they're Da Chief, you'll see them constantly threaten to suspend the loose cannon for their impulsive heat-of-the-moment shoot-first-ask-questions-later behavior. If they deem that the situation warrants it, they may bend the rules slightly, but they'll never go so far as to break them; they are, after all, honest and incorruptible.

Appears less regularly as a main character, in which case they're likely to be presented with a To Be Lawful or Good dilemma.

Often the complete opposite of a Cowboy Cop, with whom they are often paired to form an Odd Couple. If a Good Cop/Bad Cop dynamic forms, they tend to be the good one. Police officers who appear in the Police Procedural tend to be uniformly this type of cop, due to the relative paucity of cowboy cops in Real Life. Depending on the themes of whatever piece of fiction they are in, the By-the-Book-Cop can be either a protagonist who represents the epitome of honesty, or an antagonistic Obstructive Bureaucrat who gets in the Cowboy Cop's way.

Can sometimes overlap with Reasonable Authority Figure if they acknowledge that occasional breaches of procedure can be acceptable, or even necessary, depending on the circumstances. But it can just as easily crossover into Lawful Stupid if they adamantly insist on adhering to protocol no matter what (including towards Cop Killers).

Roger refuses to break the law even when the mayor orders him to.

Roger refuses to break the law even when the mayor orders him to.