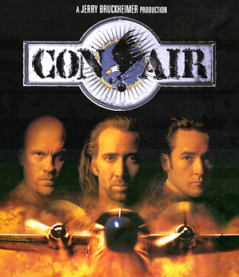 Con Air is an action movie made in 1997, released by Touchstone Pictures and produced by Jerry Bruckheimer.

Army Ranger Cameron Poe (Nicolas Cage) loves his wife, Tricia (Monica Potter). Just ask the drunk he killed in the course of defending her when she was pregnant, earning him seven to ten years in prison. He loves his daughter Casey (Landry Allbright), too, taking time every day in prison to communicate with both of them and making sure that he leaves prison a better man than he entered. Cameron Poe is now on parole, and on his way home to see his family. It will be his daughter's seventh birthday.

Cameron Poe is a Nice Guy. Just don't threaten his family. And especially don't try to keep him from them.

Unfortunately, some criminals are about to learn this the hard way, because Poe and his best friend, the diabetic Mike "Baby-"O'Dell (Mykelti Williamson), are put on the Jailbird, a Fairchild C-123 that is not only transporting Poe home, but is also being used by U.S. Marshal Vince Larkin (John Cusack) to transport a number of notorious criminals to a new supermax prison. These include:

Unbeknownst to them, there's an undercover DEA agent (José Zúñiga), under the command of his Jerkass Boss (Colm Meaney).

These criminals are about to learn a hard lesson: Don't. Mess. With Cameron Poe. They don't know Poe from Adam.

And never, ever threaten the bunneh.

Not to be confused with the Conair Corporation,

I said, put. The tropes. Back in the page:

(Sayonara - Japanese for "Goodbye")
Why couldn't you put the tropes back in the page?
Feedback

The main villains of Con Air are introduced via clunky exposition.

The main villains of Con Air are introduced via clunky exposition.