Reminiscing About Your Victims 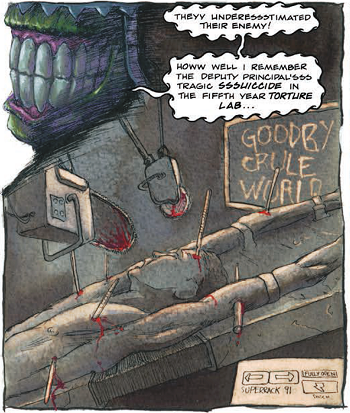 Little Sidney was very advanced for his age.
"Do you have a brother? I shot a man once who looked like you. In Kiev. In... '93, I think. I'm sure you heard about it. The Spetsnaz team that tried to sell a warhead? Nobody ever saw them again. [breaks into a psychotic chuckle] That was a good winter for me!"
— Michael Weston from Burn Notice deliberately plays up his Shrouded in Myth/Psycho for Hire image
Advertisement:

We know that Evil Feels Good. So, it's also natural that evil people can get nostalgic for times that felt particularly good, such as an especially fun victim or a favorite city you destroyed. Sometimes the character does it in such a way that it would be cute if not for the monstrous deeds being talked about.

Some typical uses of this trope include: a Serial Killer thinking about their kills, a Blood Knight recalling a Worthy Opponent, when the villain is intentionally trying to hurt or provoke a hero they are talking to, to show the villain having an attachment to a victim such as a Villainous Crush or a touch of Lima Syndrome, or to reveal that the villain's only known victim was Not the First Victim.

Would You Like to Hear How They Died? and the Post-Rape Taunt often go hand in hand with this trope. Contrast But for Me, It Was Tuesday, where the villain doesn't remember their victims. Compare and contrast Antagonist in Mourning. Can be an excellent Establishing Character Moment, particularly if a character is meant to be established as Ax-Crazy. See also Writing About Your Crime, when the past atrocities are committed to paper instead.