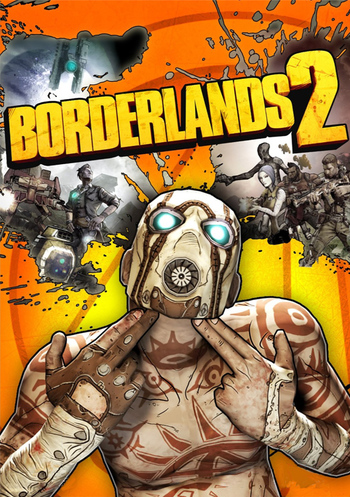 This ain't no place for no hero...
"87 bazillion guns" just got BAZILLIONDIER.
Advertisement:

Borderlands 2 is a 2012 sequel to Gearbox Software's Borderlands.

Five years after the original Vault was opened, the Hyperion Corporation has taken over Pandora and begun extensive mining operations for "Eridium", a precious mineral that has begun to appear across the planet. Led by its president, Handsome Jack (who stole the credit for opening the Vault and defeating the Destroyer), Hyperion's robotic armies have crushed all resistance to Jack's goal of "bringing order" to the savage wastelands.

Meanwhile, there are whispers that a second Vault has been found deep within Pandora, attracting the attention of a new team of Vault Hunters:

Like the first game, Borderlands 2 is a mission-based First-Person Shooter with RPG Elements, allowing the player to upgrade their characters with new skills and abilities, while blasting their way through hordes of alien creatures, robots, and insane bandits. As before, the game thrives on a procedurally generated loot system that can and will spit out thousands of different weapons, all with different stats and many with unique abilities for the player to experiment with.

Four main story-based DLC packs were released as part of "Season one" of the DLC, with Gearbox later releasing "Headhunter Packs", holiday-centric miniquests which focus around killing a boss and gaining a head and skin as a reward.

There have since been two "seasons" of DLC, consisting of the following:

Gearbox has also spread Borderlands 2 to some cross-promotional materials, including a few short backstory films and another video game appearance:

A villain-based Interquel set between the first and second games, Borderlands: The Pre-Sequel! was announced on April 9, 2014

, with the requisite four new playable classes: Claptrap the Fragtrap, Nisha the Lawbringer (The Sheriff of Lynchwood), Wilhelm the Enforcer, and Athena the Gladiator.

As part of the promotional campaign for Tiny Tina's Wonderlands, Tiny Tina's Assault on Dragon Keep was released as a standalone game

as Tiny Tina's Assault on Dragon Keep: A Wonderlands's One-Shot Adventure for free in the Epic Games Store, and at a small charge everywhere else, on November 9, 2021.

Even long after leaving the Hodunk clan with her kids and adopting a "seductive showgirl" persona, Moxxi still occasionally lapses back to her old redneck accent similar to Scooter and Ellie, much to her horror.

Even long after leaving the Hodunk clan with her kids and adopting a "seductive showgirl" persona, Moxxi still occasionally lapses back to her old redneck accent similar to Scooter and Ellie, much to her horror.