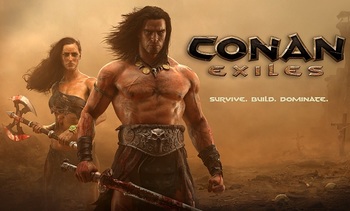 Conan Exiles is a open-world survival game developed by Funcom and set in the world of Conan the Barbarian. You play as an exile, one of thousands cast out to fend for themselves in a barbaric wasteland swept by terrible sandstorms and besieged on every side by enemies. They must raise above all obstacles in their way by gathering resources, growing their crops and fighting animals, and then they are able to explore the world on their own or joining others through multiplayer.

The game was released on May 8th, 2018 and is currently accessible on Steam, Xbox One and PlayStation 4.

An expansion pack, The Isle of Siptah, was announced on September 10th, 2020. It entered Early Access on the 15th. The full release came on May 27, 2021. Another big update pack, Age of Sorcery, is upcoming. Age of Sorcery will replace the cosmetic DLC with an in-game store, rework building, attributes, and perks, add a "Seasons" system to earn in-game currency for use in the store and seasons, and add (obviously) sorcery.