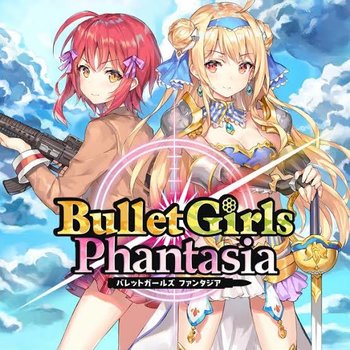 Our main protagonists, Aya Hionomoto and Princess Silvia Hortensie
It's a special day in Misakimori Academy as its Ranger Club prepares for the "Blood Sweat and Tears" athletic meet. Their last training session goes awry, however, when a mysterious ball of light appears out of nowhere, and the members suddenly find themselves transported into a medieval fantasy world, Midgard. Fortunately, their supply truck, guns, and plenty of ammo came with them, and so they set up a base, start exploring, and try to find a way to get back home.
Advertisement:

As they run into and ally with natives of the world, however, they find themselves entangled in a war against the Jet Black Dragon and its horde of monstrous Devyants, with lost memories, time travel, and ancient prophecies only making things yet more complicated for our heroines.

Bullet Girls Phantasia is a third-person shooter and the third game in the Bullet Girls series, developed by Shade and published by D3 Publisher. It was originally released for Playstation 4 and Playstation Vita on August 9, 2018, a PC port via Steam vas released on January 17, 2020.

Compare Senran Kagura, a similar Fanservice-filled game series, but more on the Beat 'em Up side of things and centered around ninja girls.