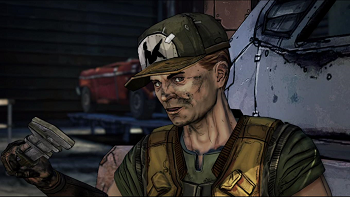 A character that likes to play around with machines and usually gets filthy doing so. A side effect of his grunginess is that he often turns out to be Mr. Fixit in some way, shape or form.

These characters usually work with mundane objects like cars or stereos or fuse boxes. If they show up in a fantastic setting, they'll often mistrust technology and favor elbow grease to solve a problem. Their way of speech will also make their spaceships sound like normal motor vehicles.

In other words, this is a mechanic, be he mundane or fantastic, with a lot of similar threads regardless of the type.

See Wrench Wench for the Distaff Counterpart to this trope.

Not to be confused with the name of the comic book by Tim Eldred or the Firefox app enabling custom scripting.