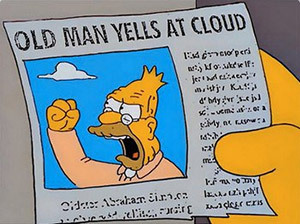 Back in my days, we didn't have these new-fangled clouds!
"They say I'm old-fashioned, and live in the past,
but sometimes I think progress progresses too fast!"
— Dr. Seuss
Advertisement:

The old guy who loves to complain about how things were better in his day, and that kids these days show no respect. The Grumpy Old Man (or woman, this isn't gender exclusive) is similar to a Sadist Teacher, but old — and not usually in direct authority over the youngsters. May possess unexpected wisdom — but is likely to just complain about the young whippersnappers walking on his lawn, damn young'uns, no respect, don't know how good they have it. In my day we had to walk fifteen miles through the snow to get to school, uphill both ways! And we didn't complain, nosir, we were happy, and we got a dime a year to work 17 hours a day in the mines, one cent an hour, but did we complain? NO! We were satisfied, dammit, because there was a depression going on, and we didn't dare complain when dad beat us, because it built character and we respected him for it, not like these days …

In some cases, the Grumpy Old Man might be a Jerk with a Heart of Gold who is able to slowly warm up to the company of kids — but, more often than not, he's just an elderly Jerkass (in which case, he's often The Killjoy).

The Old Timer would be the Fan Dumb variant that doesn't appreciate those young whippersnappers who have the unmitigated audacity to enjoy any of the TV shows, movies, music, or whatnot that were popular when he was young.

This character will, at some point, yell at the darned kids to get off his lawn.