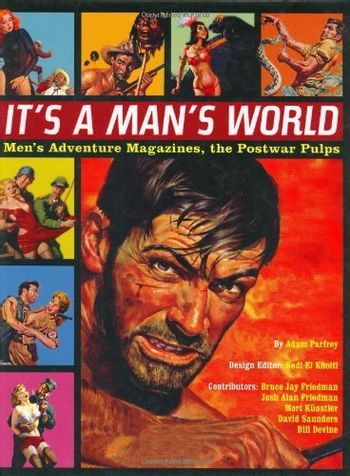 Nazis, damsels, beasts and savages. Just another day in the life of the Y-chromosome.
"The greatest joy for a man is to defeat his enemies, to drive them before him, to take from them all they possess, to see those they love in tears, to ride their horses, and to hold their wives and daughters in his arms."
— Unknown, but often attributed to Genghis Khan
Advertisement:

An Omnipresent Super-Trope and Brother Trope to Women Are Delicate. It can be assumed to exist in every form of media unless otherwise stated. For a number of reasons, fiction tends to treat men as the stronger, hardier, more reliable, and more resilient of the two genders. In most forms of human society, the assumption is that women are the more delicate of the sexes and are more suited for nurturing than the more aggressive roles undertaken by males of the species. This creates the assumption that every man is a natural badass or should be. This may be because Most Writers Are Male, or the implication that Men Act, Women Are.

This Stereotype has two forms:

Regardless, a man being in a dominant, physical role is seen as natural while a woman in the same role is treated as exceptional. Even if a woman does take on a physical role, there still exist tropes which portray her as less tough than her male counterparts such as Guys Smash, Girls Shoot; Male Might, Female Finesse; She-Fu; or Waif-Fu.

However, the Double Standard has a negative effect for men, too. Men are often treated as the expendable gender or the only ones capable of being abusive. Further, because the toughness bar is raised for men, a Non-Action Guy will be more harshly criticized than a female counterpart. He will also have to take greater risks and perfom more physical forms of combat. In Guys Smash, Girls Shoot, he'd better be the one smashing even if he's more skilled at shooting.

Further, men are often portrayed as not being capable of anything BUT physical force to make their points. Often despite the target audience being themselves male, guys are portrayed as dumb, childlike, blunt instruments who can't do anything right if it involves becoming "domesticated". When that happens, a former badass will turn into a Jaded Washout, and possibly a Fat Slob. His only means of domestic problem-solving will involve Percussive Maintenance or Tim Taylor Technology with marginal degrees of success. When it comes to their own children, domesticated men will often be bumbling wrecks, over-compensating in aggression, or completely disinterested altogether. In short, these domesticated men are portrayed as having something "wrong" with them, due to being removed from fields of violence, power, or non-domestic achievement. In the event that a man is not acting like the in-charge, tough guy he should be, the only things that can cure him are Tough Love or Percussive Therapy (especially if the percussion is on HIM).

Also, please keep in mind that the word chosen to represent this trope was "tough". In addition to physical force or power, "tough" also means resilient, stubborn, slow to change, dense, and inflexible, which are also ways men are stereotyped. We intentionally chose a polysemic

word for this trope because Tropes Are Flexible, and like all stereotypes, this one has changed (and will change) a LOT as people attempt to use it or downplay it.

No Examples Please. This should be an index of tropes, and nothing else.

open/close all folders
Played Straight
Aversions, Inversions, and Subversions
Zig-Zagged
Tropes in this section tend to showcase a man with both tough qualities and more delicate ones, or two or more characters with juxtaposing characteristics.
Played With
Tropes in this section are tangentially related to this trope, in that they likely would not exist if this trope was not the default assumption. These tropes are typically "exceptions" to this trope—but with some sort of baggage that examines the negative consequences of men failing to be tough, or the benefits of measuring women that have the same capability of men. However, the relation has become woven with so many societal complexities that they cannot directly be considered subtropes or aversions.