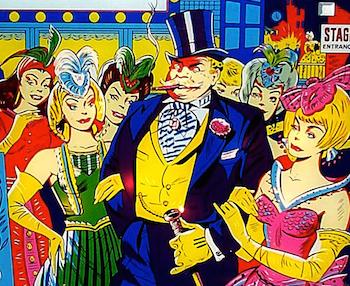 Basically the target of a Gold Digger. Someone the digger pretends to love for the ticket's money, power, or some other thing the digger wants. Usually, the meal ticket is wealthy, but they may simply have a dependable income that's enough that the gold digger won't have to worry about supporting themselves.

If a rich man is over 50, and the wife is under 40, this is the second most common type of fictional relationship after a May–December Romance. Shows up regularly with Ugly Guy, Hot Wife.

Modern examples usually place a man in the position of Meal Ticket, but from Elizabethan to Victorian times, it was just as likely that the Meal Ticket would be female and an heiress, with a male Gold Digger (or diggers!) in pursuit. Female examples also show up in media targeted at older women (as in the saying that older men are looking for "a nurse or a purse").

In some cases, the digger might grow to love the ticket, but it's rare. Expect fawning until the marriage, and then neglect or even abuse afterward. A happy ending is a toss-up. Male Meal Tickets have a high chance to come across the Black Widow and have their lives quickly shortened.

The trope name has slightly hazy origins; its use for an actual ticket that could be exchanged for a meal in some place goes back to the 19th century, and by the mid 20th, it was being used for someone who another person used as a source of support. "Sugar Daddy" (another bit of old slang) is an alternate term, indicating an older male Meal Ticket who supports the Gold Digger with gifts of valuable items (jewelry is always popular) or sometimes cash. Someone referred to as a Sugar Daddy isn't usually expected to marry their Gold Digger, though; the relationship is less formal than that, and may be fairly short-term.

Suffice it to say, Truth in Television, but No Real Life Examples, Please!