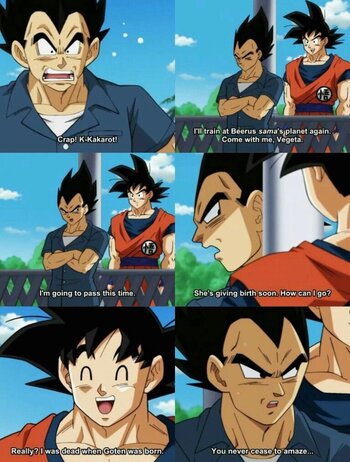 When Goten was born and during most of his childhood.
"I'll be a better single parent than all of my high school girlfriends combined!"
— Captain Hero, Drawn Together
Advertisement:

In order to create a baby, a man and a woman need to have sex.note  Barring artificial insemination, cloning, or the odd Mystical Pregnancy. Strictly speaking for the man this is an act of minimal investment since he can (and sometimes does) ditch the woman and leave her holding the bag (or baby, if you will). Unless she gets an abortion (which she only very rarely does) or puts the baby up for adoption, she either has to raise the child alone or with the help of a stepfather.

This trope is what happens when the sperm donor, having been absent for most of the child's life, is revealed to be the father and all of a sudden everything is chillin' between him and his long-ago Love Child.

It can be justified if Daddy Had a Good Reason for Abandoning You. Still, this trope is a bit of a harder pill to swallow when the guy in question suddenly receives a Promotion to Parent in spite of not actually having done a whole heck of a lot to deserve it. This trope is commonly averted if the stepfather is a sympathetic character in the story. On the flip side, if there is a stepfather and we hardly even see him, chances are that sperm daddy is going to be the one referred to lovingly at the end of the story.

Be wary of spoilers as you read.