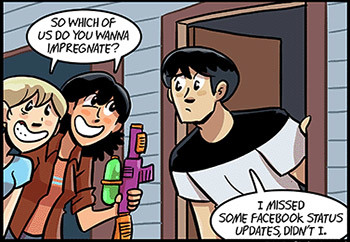 "Mr. Stephen Fry,
I see no reason why
You wouldn't want someday maybe
To let me have your baby..."
— Molly Lewis

In this trope, someone wants a child and picks some ("lucky") person who is not their spouse, or wedded Love Interest, to be the one to do it. While this may overlap with the Stalker with a Test Tube sometimes, many cases are much nicer about the offer and their motives are not to use the other person for their genes. The choice may be motivated by feelings of actual respect, love or affection, a Darwinist Desire, or finding a good person to raise a family with. The individual may also be a Prince, Princess, Ojou, Last of His Kind, or Living MacGuffin that needs to produce an heir for a bloodline, family or race, but their reasons may still motivated by some level of respect, love or affection for the partner chosen. As such, if the characters are both villains, then expect to see Villainous Virtues, Villainous Friendship and Even Evil Has Loved Ones.

Super-Trope of the followingnote Note that despite the negative implications/consequences of these subtropes, the supertrope itself can be way more friendly than any of them.:

Expect at least one character to fit this trope in a Harem Genre story. If they're middle-aged, they may be a Christmas Cake or state that "My Biological Clock Is Ticking", and if homosexual, this is a case of All Lesbians Want Kids. If the baby-seeker is a non-human, expect this to overlap with "Do You Want to Copulate?". If Mate or Die is also a factor, it may overlap with Only You Can Repopulate My Race.

Because this is a mutually beneficial partnership, it almost always averts That Thing is Not My Child!.

For more information, check out the Analysis page.