Shame If Something Happened 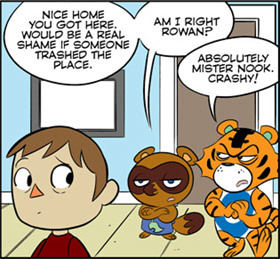 "The raccoon moneylender who gives you your home loan being the local mafia don is the obvious Animal Crossing joke."
"Oh, you'd be surprised how detrimental a poor choice of fashion can be. Take this dress. It may be all the rage now but in a very short time it can become tiresome, an affront to the eyes. Certain people might even think it's objectionable. And then... (rips it in half) Nothing but rags."
— Garak, Star Trek: Deep Space Nine ("Profit and Loss")
Advertisement:

Oh, hello, tropers. Why, isn't this a very well-written article we have here? It would be just terrible if someone were to, say, scrawl ethnic slurs all over it...

Then the Bad Guy rattles off a few offhand remarks about how beautiful the Good Guy's wife, child, house, dog, mother, whole family, etc. are. He shows recent photos of the lovely person or thing in question, and perhaps a copy of personal information the Good Guy thought was secret. And then comments offhandedly that "It'd be a shame if something bad were to happen to it/them."

The clear implication is if the Good Guy doesn't give the Bad Guy what he wants, something bad will happen to it/them.

This generally gets the Good Guy back to the bargaining table, and shows just how bad the Bad Guy is. It also calls attention to the resource level of the Bad Guy and his criminal conspiracy.

There may be some overlap with The Villain Knows Where You Live (when the Bad Guy backs up this threat by proving he knows where to find the Good Guy and/or the Good Guy's family). This may lead to an And Your Little Dog, Too! situation, making the Good Guy much more likely to take the Bad Guy down than if they hadn't threatened the Good Guy's friends and family. And the Bad Guy needs to make sure that the Good Guy they're trying this on with isn't someone who could instantly and unexpectedly turn them into a smear on the wall if they were in any way displeased, since threatening innocent loved ones is a good way to trigger an Unstoppable Rage from the seemingly meek and mild.

This is also a common stock phrase used by thugs (usually The Mafia) in extortion rackets. "You've got a nice (noun) here. It'd be a shame if anything were to... happen to it."

Often parodied: the Big Bad will threaten the hero with some minor inconvenience, and it will be treated with the same seriousness as a death threat, if not more seriously.

In linguistics, this sort of threat is known as a Gricean Implicature.

Note that another even subtler way to make this kind of threat is to assert hope that some situation will proceed normally as though there were some reason for it not to: "Cute kid you got there. I hope she'll grow up to have kids of her own and live to see a ripe old age."

See also Implied Death Threat, Terms of Endangerment, Interrogation by Vandalism and Trouble Entendre. If the Bad Guy's threat actually gets carried out, it often leads to I Have Your Wife. If one doesn't want to look bad, he can use a Monster Protection Racket instead.

Marcus is shocked to come home and see Silco playing with his daughter. Silco then makes stealthy threats at the daughter's life. The message gets through to Marcus.

Example of:
The Villain Knows Where You Live

Alternative Title(s): Such A Lovely Noun, Shame If Something Should Happen

Marcus is shocked to come home and see Silco playing with his daughter. Silco then makes stealthy threats at the daughter's life. The message gets through to Marcus.