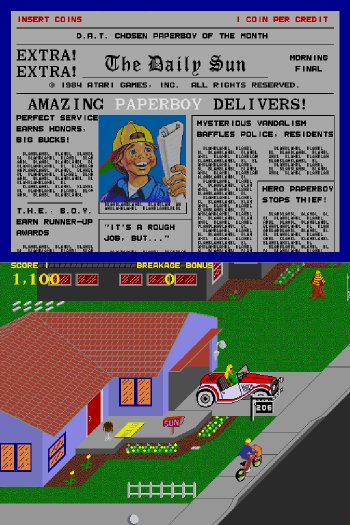 ...and don't be late for school! note Maybe the lady in front of you can give you a ride, just need to pay her for the gas though.
"You may not like the news, but you have to admire the person who delivers it. Paperboy!"
Advertisement:

A video game series where you play as a paperboy (or papergirl, in some games) who delivers newspapers to a local neighborhood for the Daily Sun ("The World's most throwable newspaper").

In this neighborhood, even on Easy Street... everything is trying to kill you.

The result is a hilarious Nintendo Hard game that is also effectively a Rail Shooter, even if it doesn't look much like one.

There was also a Nintendo 64 game called Paperboy 64. It was even adapted into an episode of Captain N: The Game Master.