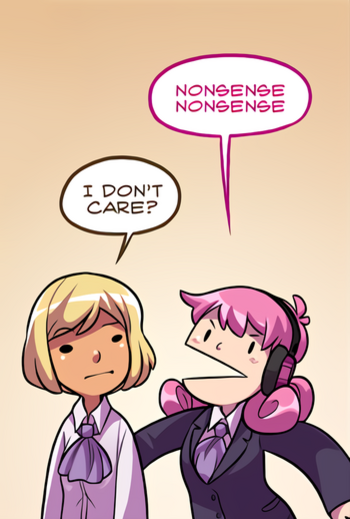 This trope occurs when someone is listening to someone talk and all they can hear is "blah, blah, blah". Usually used for comedic effect, it indicates that the auditor finds the conversation irrelevant, incomprehensible, or boring. Or all of the above.

Sometimes the trope is invoked literally: "Sorry doc, but all I heard of what you said was blah blah liver failure blah blah." Occasionally, this is represented visually from one character's point of view as a stream of words that all flow together. If one character is mocking another for being boring or predictable, they may repeat part of what they said and trail off into "blah blah blah" while performing impromptu Bare-Handed Puppetry.

The irate versions can verge on Censored for Comedy. The overanalysed may be [Trope Name]. In some cases, it's Technobabble. If it is done by a teacher, the students may fall Asleep in Class.

An older phrase of similar usage from British television is Rhubarb Rhubarb (or, rarely, Rabbit Rabbit). See also Audience Murmurs. May combine with Wall of Blather.

Booker and the gang get so tuned in to their favorite show that they tune everyone else out.

Booker and the gang get so tuned in to their favorite show that they tune everyone else out.