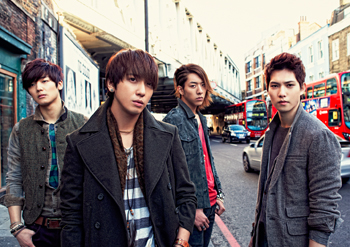 A South Korean idol rock band who made their indie debut in Japan 2009 before making their official Korean debut in 2010. Short for Code Name Blue (with Blue itself short for Burning Lovely Untouchable Emotional), they are under FNC Entertainment (FNC Music when they debuted in Korea). The band comprises:

Their debut was very successful in Korea, scoring a win with their debut song "I'm A Loner" after 15 days which made them the boy band with the quickest music show win after their debut until 2014 (where YG's new group Winner snatched a win even more quickly). Similar to their labelmate FT Island who debuted before them, they won everyone with their personalities (charming and dorky), good looks and their unique appeal as a band, something rare in kpop. They also made their official Japan debut in 2011 and, in contrast to their lacking indie sales, they have also proven to be great success there.

Additionally, Jonghyun and Juniel's subunit "Romantic J" made their debut in December 2013; and in January 2015 Yonghwa also made his solo debut with the album "One Fine Day", full of collaborations and his self-composed music.

The are one of the most well-known kpop bands along with FT Island, as well as amongst kpop artists. Despite their idol status, they also write and compose many of their songs, especially Yonghwa who is one of the most respected idols for writing countless good tunes. They are continuing to work towards their goal as true artists and show idol-wary people just how capable they are as a band.

Members and their music/acting works show examples of: