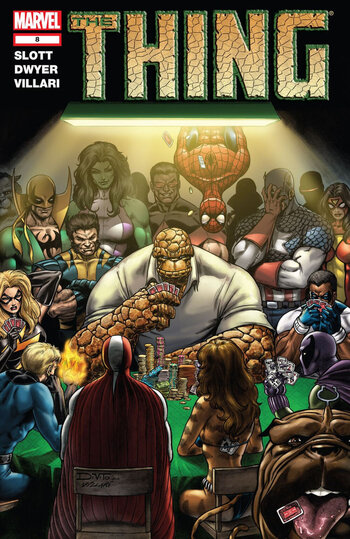 The cover to volume 2, issue 8: in the center, Ben Grimm, and surrounding him, his friends.
Advertisement:

The Marvel Comics character of the Thing has had two self-titled books so far:

The Thing Vol 1 (1983–1986) was initially written by John Byrne, with art by Ron Wilson. It begins with Ben pondering his childhood on Yancy Street and then goes into the aftermath of Annihilus's attack, with Ben visiting Alicia Masters in the hospital and getting into various misadventures. Thing #10 leads directly in Secret Wars (1984). For the next twelve issues, Ben is on Battleworld, having stayed behind because he could change back and forth between his Thing and human form. After the Battleworld saga came to an end, Byrne left the book, replaced by Mike Carlin. Leaving the FF due to Alicia being in a relationship with Johnny (it was actually a Skrull posing as Alicia), Ben goes on another series of misadventures while Walking the Earth. Eventually, Ben joins the Unlimited Class Wrestling Federation and becomes involved with the stuntwoman Sharon Ventura. The book ended with thirty-six issues.

The Thing Vol 2 (2006) was written by Dan Slott, with art by Andrea DeVito. Ben has recently come into a lot of money (like, say, billions of dollars) and has decided to do the things he's always wanted to do. Like date a famous actress and go to fancy parties. Too bad Arcade and his new Murderland get in the way. The book ended with eight issues.