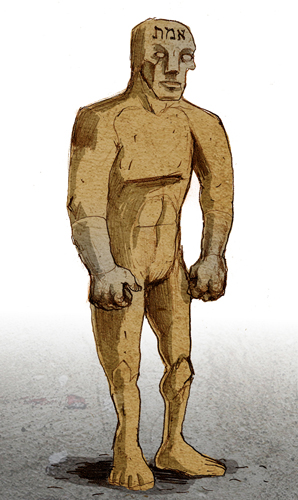 IF pogrom=true THEN goto stomping antisemites to death.
Golem must work. Golem must have a master.
— Dorfl, Feet of Clay
Advertisement:

The Golem is a creature from Jewish folklore which was a figure animated by a holy man. It was generally unable to speak, lacked a soul, and followed orders like an automaton. The original Hebrew word can mean "an unshaped form" or figuratively "a stupid person".

The creature originated in the Jewish mystical tradition of Kabbalah, which holds that those who study the holy books and are strong in the ways of the Lord may create imitations of His miracles, but only imperfect ones. As God made Adam from clay, so may a holy man create an imitation of a man, albeit one lacking a soul. Clay remains the favored building material, but alternatives, such as wood, are no objection.

In some versions of the legend, the golem always obeyed its creator but could act as a Literal Genie; the idea of the golem deliberately rebelling was only introduced later. Note that even in the early versions, the Golem usually had to be destroyed for causing destruction or taking meaning from people's lives by making work too easy.

The most famous golem story is that of Rabbi Loew

, said to have created the Prague golem in the 16th century to protect the Jewish community. In German-speaking countries, the bestselling novel The Golem (1915) by Gustav Meyrink brought it back to public consciousness and led to a series of silent films; the third film, a prequel from 1920 which shows the origin of the golem (who has the worst case of helmet hair in existence), survives today.

In some versions the golem was animated by writing the Hebrew word for "truth" (אֱמֶת ʼĕméth) on its forehead, and made inert again by erasing the first letter, converting it into the word for "dead" (מֵת mēth). However, other versions included using a "Shem", literally meaning a name and referring to one of the secret names of God. This could be put on its forehead or in the mouth.

Golem means cocoon or pupa in modern Hebrew. Both words are derived of the same linguistic root which means "holding a hidden meaning or potential". This is actually part of the original Kabbalistic aesop behind the Golem tale: the danger of creating a Golem is in its unknown nature. A human could never control or understand another mortal being the way God can.

Golems are usually created when a non-living vessel is magically imbued with life and consciousness. Depictions vary whether the golem requires magic to continue functioning after being made. The entry of the golem into popular culture as a fantasy monster is probably Dungeons & Dragons, which calls the classic version a "clay golem", and included other types such as Stone, Iron, or the Frankenstein's Monster-like "Flesh Golem". Other fantasy worlds have expanded into substances such as Lead, Wood, Lava, Blood, Mithril, and even more unlikely substances, like Glass, Paper, Wax, Junk and Maggots. And don't even get us started on the ones made of dirty laundry.

Generally, a golem's makeup is indicative of both their strength and the nature of their builder. An iron, steel or adamantine golem will likely be ungodly tough, a glass golem a literal Glass Cannon, and a flesh, blood or bone golem likely built by less than savory types.

More loosely the term can be applied to any robot that is explicitly run on magic rather than technology. Talos, a mythical Greek giant made out of forged bronze, is a good example. Do note it's not without controversy to use the term "golem" outside of its Jewish context and some works go with other terms for the general concept instead, like the aforementioned "robot", "homunculus" (which more or less are the Christian equivalent of the golem anyway), or the broader meaning of "simulacrum"/"simulacre".

Specific subtropes, distinguished by the materials or methods used to make them, include Flesh Golem, Improvised Golems and Snowlems.

See Rock Monster, Living Statue, Frankenstein's Monster, and Artificial Human. Usually a Perpetual-Motion Monster. Sentient Golems may be Nature Loving Robots, doubly so if whatever they are made of has a natural theme to it.

Not to be confused with the other Golem. Or Gollum. Or even the game of the same name.

See also Improvised Golems, for when you don't have time to make a proper golem.

The first boss in the game, The Juggernaut is a massive animated set of dark armor that trudges toward the castle and fires its arm cannon.

The first boss in the game, The Juggernaut is a massive animated set of dark armor that trudges toward the castle and fires its arm cannon.