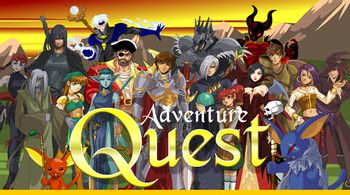 by Artix Entertainment is a lunch break sized RPG that takes place in the land of Lore. The game, though online, is single player, and uses online functions for updating the game easily and for wars. For a one-time fee, the player can become a Guardian to buy more weapons, more quests, more places, etc. The player can also separately buy Z-Tokens for strong weapons, spells, pets and other things.

The game has various storylines that run parallel or interconnect with each other, presented through a series of quests with the player character's interaction. Some of the storylines have deep plots and impressive characters, such as the long-spanning Devourer Saga, the journey of the Devourer and Uncreator The'Galin to uncreate Lore and the player character's attempt to stop him, and some storylines are short, silly spoofs, such as Mogbusters. Either way, the game's writing covers a wide gamut. Even more so on the forums, where there is plenty of backstory.

The game doesn't have only its simple fighting system to keep players enticed. Wars are special events used to move plots, where the player character enters a series of battles and each monster the player and other players kill works toward a certain number to fight the boss for rare event items. The player can find mini-games in quests. Housing is a big feature, too, where the player clears space of land, start building a house, and even get monsters to protect it.

It is joined with the following sequels afterward: DragonFable (set 5 years prior to AQ in a parallel timeline), MechQuest (5000 years prior to AQ) and AdventureQuest Worlds (which is a multi-player version set ten years after AQ and in a parallel universe), and WarpForce (set at the same time as AdventureQuest but IN SPACE, just expanding on the Space Opera that was going on in the background).