Literature / How the Grinch Stole Christmas! 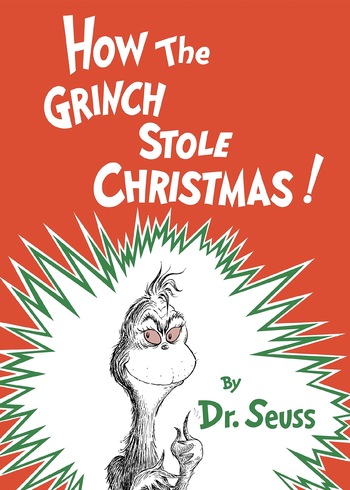 The Grinch gets a wonderful, awful idea.
"Every Who down in Who-ville liked Christmas a lot...
But the Grinch, who lived just North of Who-ville, did NOT!
The Grinch hated Christmas! The whole Christmas season!
Now, please don't ask why. No one quite knows the reason.
It could be his head wasn't screwed on just right.
It could be, perhaps, that his shoes were too tight.
But I think that the most likely reason of all
May have been that his heart was two sizes too small."
Advertisement:

A classic 1957 children's book written and illustrated by Dr. Seuss, telling the story of a mean-spirited, cave-dwelling creature called The Grinch who can't stand Christmas. Disguising himself as Santa Claus, he proceeds to pilfer all of the presents, foodstuffs, and other Christmas paraphernalia from the perky residents of nearby Whoville in an effort to, well, steal Christmas from them. While he succeeds, the Whos happily sing their big Christmas song anyway. Now realizing the True Meaning of Christmas, the Grinch has a change of heart, and returns all the loot as the Whos cheerfully welcome him into their community.

This plot has become an oft-recycled Stock Parody.

In 1966 the story was adapted into a very popular television Christmas Special by animator Chuck Jones. In 1998 it became a stage musical that played Broadway in holiday engagements over 2006-07. In 2000, they made a live-action feature film starring Jim Carrey as a Large Ham version of the title character. Illumination Entertainment released their own computer-animated version of this tale in November 2018, with Benedict Cumberbatch in the title role. The story also has its own dedicated event at the Universal Studios parks, known as Grinchmas.