Film / How the Grinch Stole Christmas! 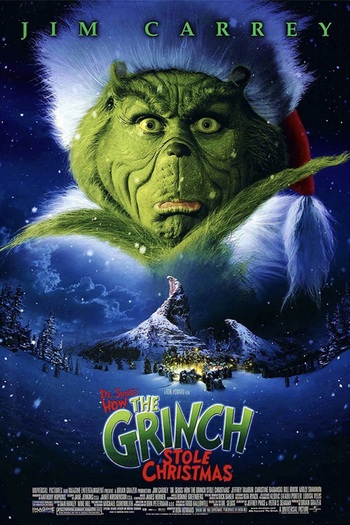 You better watch out.
"The presents! They'll be destroyed! And I care! ...What is the deal?!"
— The Grinch
Advertisement:

Dr. Seuss' How the Grinch Stole Christmas (released internationally as Dr. Seuss' The Grinch) is a 2000 Christmas film based on the book of the same name, directed by Ron Howard and starring Jim Carrey as the title character, with a supporting cast including Christine Baranski, Jeffrey Tambor, Taylor Momsen, Bill Irwin, Molly Shannon, and Clint Howard.

The first feature-length adaptation of one of Seuss's works and one of only two to be live-action, the film finds Carrey cavorting a little more than usual, leaping around all over the place and wearing a green mask. Again. While it follows the original book pretty closely, the film features an additional backstory to make the Grinch a more sympathetic figure. Despite getting a mixed critical reception on release, it is to date the second-highest-grossing live-action Christmas film of all time (behind Home Alone), and also won the Academy Award for Best Makeup.

A second live-action film based on Dr. Seuss' stories was released in 2003. However, it turned out to be a Franchise Killer, putting the kibosh on any more such productions and resulting in all future productions having Shifted to CGI.

An animated film adaptation by Illumination Entertainment was released to cinemas in November 2018, starring Benedict Cumberbatch as The Grinch.

Where are you, Christmas? Why can't I trope you?

The Grinch and Cindy Lou

Cindy Lou screams when she sees the Grinch, and Grinchy screams back at her.

The Grinch and Cindy Lou

Cindy Lou screams when she sees the Grinch, and Grinchy screams back at her.