Ass in a Lion Skin 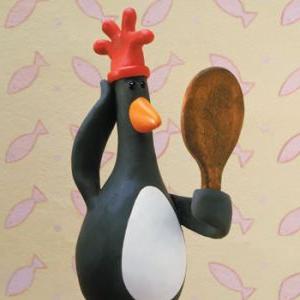 "Have You Seen This Chicken?"
Advertisement:

If you are a duck on the make, or a Rascally Rabbit trying to escape the hunters, or just a dog whose owner made it wear a turkey costume

◊ (whether on its own volition or not), you have a good chance of turning into an ass in a lion skin. This involves one animal (usually a Funny Animal) that attempts to pass as an animal of an entirely different species, not simply of a different style or level of reality — Augie Doggie pretending to be Top Cat, but not Augie Doggie pretending to be Doggie Daddy, Scooby-Doo, Underdog, Pluto, or Rin Tin Tin. Note also that the trope specifically excludes an animal dressed as or imitating a human being (or vice versa).

Though this is mainly an Animation Trope (the Looney Tunes/Merrie Melodies series in particular were addicted to it), it also occurs in other fictional contexts. The disguise in question is usually Paper Thin, but is often remarkably successful, to the point that its removal may actually provoke a comedic BSOD — "My God! You're not a fruit bat at all! You're a killer whale!"

The Ass In A Lion Skin has a Real Life counterpart in the phenomenon of "animal mimicry," in which a harmless milk snake may resemble a deadly coral snake, but in such a case, unlike its fictional counterpart, the mimicry is permanent and (probably) unconsciousnote To tell the difference, remember this saying: "Red touches yellow, you're a dead fellow; red touches black, you're OK, Jack."

Compare A Wolf in Sheep's Clothing and Animal Disguise. Contrast with Furry Confusion, which is about the bewilderment caused by differences in two individuals of what are supposed to be the same kind of animal; with I Am Not Weasel, the Inversion of this trope, in which the animal is taken for another species against its wishes; and with most of the entries on the Sliding Scale of Anthropomorphism, which are about animals acting like humans. Not to be confused with a human whose ass is in a lion skin; that's Fur Bikini or Loincloth. When the filmmakers dress up an animal as a cheap way to put a "monster" on screen, that's a Slurpasaur.

The Trope Namer is, of course, the Aesop's Fables of the same name "The Ass in the Lion Skin".