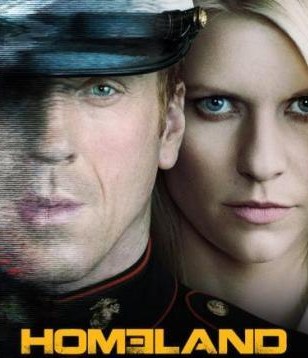 Who's the hero? Who's the threat?
"The nation sees a hero. She sees a threat."
Advertisement:

Homeland (2011-2020) is a psychological Spy Drama loosely based off the Israeli series Hatufim (literally "Abductees", English title Prisoners of War) sharing an executive producer, co-developed by Gideon Raff, Alex Gansa and Alex Bererson, produced by Showtime and set during The War on Terror.

A raid on a terrorist safehouse in the Middle East leads to the rescue of USMC Sergeant Nicholas Brody (Damian Lewis), who has been missing in action for eight years. Brody receives a hero's welcome from his wife Jessica (Morena Baccarin), CIA Deputy Director David Estes (David Harewood), the Vice President and the entire country — but not from Carrie Mathison (Claire Danes), a former CIA Operations Officer. Based on intelligence from her last (and completely unauthorised) mission, Carrie believes that Brody is a sleeper agent waiting to be activated. With the help of her mentor, CIA Middle East section chief Saul Berenson (Mandy Patinkin), Carrie sets out to prove that Brody, seen by the world as an American hero, is really a traitor.

The show premiered in October 2011 and has won Golden Globes and Emmys for best series and best main actors (both Danes and Lewis) in the drama category. In April 2018, Claire Danes confirmed that the eighth season is the final season