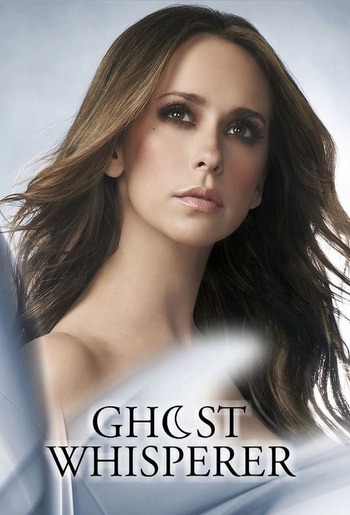 Like the Ghostbusters, only hot.
"My name is Melinda Gordon. I just got married. I just moved to a small town. I just opened an antique shop. I might be just like you. Except from the time I was a little girl I knew I could talk to the dead. Earthbound spirits my grandmother called them. The ones who have not crossed over because they have unfinished business with the living and they come to me for help. To tell you my story, I have to tell you theirs."
— Melinda Gordon, Ghost Whisperer, First Season Opening Narration
Advertisement:

Ghost Whisperer is an American TV show that ran from 2005 through 2010. It's also known as that show where Jennifer Love Hewitt traipses around in vintage clothing, often low-cut. The episodes follow a formula: Ghost makes its presence known, Melinda flutters about trying to help, Melinda helps the ghost with its business, everyone cries, ghost goes into The Light. The few instances where that doesn't happen involves the ancient spirits that inhabit Grandview, Melinda's town, and some prophecy involving Melinda and her abilities.

The show contains quirky side-characters you'll want to see more of, and a main character who you'll occasionally get sick of.

Season One: We meet Melinda Gordon and her freakish ghost-seeing ability, as well as her supportive husband and her friend Andrea (the friend eventually dies in a plane crash).

Season Three: More ghost-hunting, a not-so-coherent explanation about Melinda's brother, and unraveling of Melinda's family secrets. Her relationship with her mother is repaired, and we find out the truth about her real father.

Season Four: Payne leaves, Eli arrives, and Jim gets shot dead, but not for long. He returns with amnesia, goes on a quest to re-discover 'his' life, and winds up staying in Grandview with Melinda. This, of course, leads to love. Sam remembers who he really is, Melinda is pregnant with Jim's child, and they get married. Well, remarried, really.

Season Five: Time Skip forward five years and we meet Melinda's son Aiden, who has a few more spiritual powers than Melinda, according to the sagely Watchers. Of note is the ability to see "The Shinies and the Shadows", mysterious beings that respectively help and prey on ghosts, particularly ghost children, and since Aiden can see them he's especially vulnerable. The Shadows have been manipulating things in Grandview to get their hands on the Book of Changes. Sadly, also the final season.