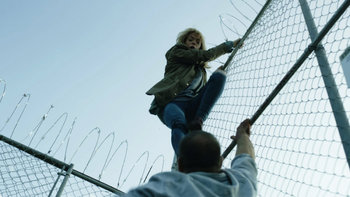 It seems that in the majority of chase scenes on foot, our runners eventually head down a dead-end alley. There's usually a chain-link fence at the end. The chase almost always ends here, with the chasee either surrendering or confronting the pursuers. Other times, one or both parties will just climb over it, but since that is hard to do with that kind of fence, this is a good opportunity to end the sequence with the pursued trying to do so and the pursuer arriving to pull them down.