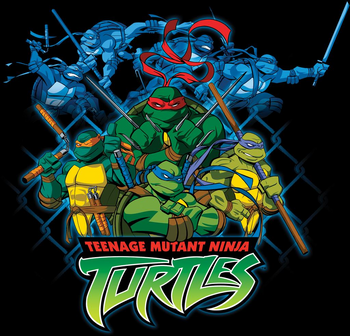 "In this life, we only have each other. If one of us goes down, we all go down."
"Turtles count it off!
ONE!
Live by the code of the martial arts
TWO!
Never fight unless someone else starts
THREE!
Always stick together no matter what
FOUR!
If all else fails then it's time to kick butt!"
Advertisement:

The second animated series starring Kevin Eastman and Peter Laird's characters, produced by 4Kids Entertainment under the direction of Lloyd Goldfine, with supervision by Laird and additional funding and input by toymaker Playmates Toys. Often nicknamed "TMNT 2K3" by fans, and designed to be more faithful to the original comic book and more serious than the previous cartoon, it translated most of the original's storylines faithfully, often directly recreating issues as episodes, while creating its own additions to the TMNT mythos. As such, this is the Darkest And Edgiest animated incarnation of TMNT.

The basic story is familiar: The Shredder kills Hamato Yoshi; Splinter, his rat, escapes; ooze from a canister labeled "TCRI" falls on some turtles and eventually himself. All five are mutated, and Splinter takes it upon himself to train them in the martial arts. Eventually, the turtles fight The Shredder; along the way meet Casey Jones and April O'Neil, who become their comrades. They have many different adventures. However, the differences in stories soon become apparent. The Shredder has an almost entirely new backstory and origin. Karai is now his adopted daughter. And new characters such as hulking gangster Hun and government agent Bishop keep things interesting.

Although spurned by a segment of fans of the old show who found it to be too different (which itself is rather ironic, given the 1987 series was a vast difference from the original source material), the series was generally well received (something of an aberration among 4Kids works), particularly for its long-term story arcs, clever use of the mythology, aversion of tropes like Status Quo Is God and Thou Shalt Not Kill, and strong characterization. Memorable episodes included "The Big Brawl," a Tournament Arc guest-starring characters from Stan Sakai's Usagi Yojimbo; "Same as it Never Was," a Bad Future tale featuring the turtles' "final" battle with the Shredder; and the 100th episode, "The Tale of Master Yoshi," a Whole Episode Flashback focusing entirely on Hamato Yoshi and his doomed love, Tang Shen.

Then, after four seasons, trouble. Thanks to Executive Meddling by all parties, the showrunners decided to skip the show's already-produced fifth season (which continued a cliff-hanger set up in the fourth) and continued straight into the sixth, which heavily re-tooled the cartoon, changing the series' setting, supporting cast, tone, and art style. The new season, titled Teenage Mutant Ninja Turtles: Fast Forward featured the turtles stuck in the future year of 2105, where they befriended Cody Jones, the billionaire great-grandson of April and Casey. The fifth season, on the other hand, would eventually air after Season 6 had finished, promoted as a series of "Lost Episodes."

But that wasn't the end of it. During production of the show's seventh season, a 10-episode follow-up to Fast Forward, the decision was made to scrap it and retool the series again. After several battles to determine what the new direction of the show would be, the program more or less returned to the previous status quo. Due to Nickelodeon's acquisition of Teenage Mutant Ninja Turtles, the seventh season, titled TMNT: Back to the Sewer, ended up being the series' last, and ended with the wedding of the series' main couple, April and Casey.

However, the series' true finale would not occur until Turtles Forever, a movie in which turtles team up with other incarnations of each other in a mad scramble to save the entire multiverse. Created as a celebration of the franchise's twenty-fifth year, it aired for the first time November 21, 2009.

After a three-year hiatus, the TMNT franchise returned to television in 2012, courtesy of the turtles' new owners.

For more details on the TMNT franchise in general, and links to its other incarnations, visit the Teenage Mutant Ninja Turtles page. For a list of some of the characters in the series, and the tropes that apply to them, visit the franchise character page. There's also a recap page.