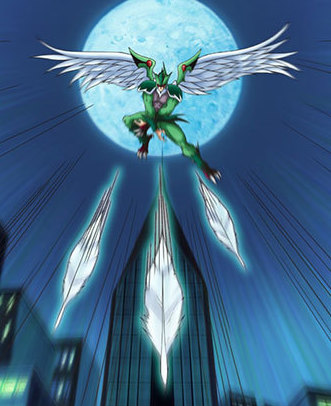 An attack popular among Winged Humanoids and a few other winged creatures: Using your own feathers as a form of weaponry.

This is usually accomplished by the attacker flapping their wings forward, releasing a storm of sharp feathers that fly off towards the intended target.

This makes no sense from a biological or physical perspective; feathers may look sharp, but in Real Life they're only good for cutting through the air; they are too delicate and lightweight to be used as a weapon. The same characteristics that make them useful for flight (lightweight, lots of wind resistance) would also make them poor projectiles: difficult to aim and losing much of their force in transit. But hey — anything's possible if it looks cool enough.

Alternatively, the character may opt to use their feathers as melee weapons (similar to knives or especially Wolverine Claws) to slice and dice the opponent at close range.

A barrage of spiked, fiery feathers that stick to the stage.

A barrage of spiked, fiery feathers that stick to the stage.